I was very surprised by this question because of course there is no age that is best to learn to draw.  I understand why this question was asked however because when we get older starting a new hobby or returning to a rusty skill like drawing seems too daunting and we might think, is it worth starting?

This question is a bit sad I think because it suggests that once we reach a certain age we can’t learn anything new. It also suggests that it would be too late to reach a stage where we have ‘learnt’ to draw.  As someone who studied art I can say that there is no end point the learning continues so who can really say when we have ‘learnt’ to draw?

Learning to draw and paint isn’t a skill learnt overnight but that doesn’t mean that it is ever too late to start.   I teach learners who are in their 60’s and 70’s who are taking up art for the first time and they get so much pleasure out of it.  I think retirement is a good time to start drawing and painting for many because my retired learners seem to have much more time than the younger ones and they are often more committed.

There is no one age that is best to learn to draw and paint, it will be personal to each of us.  Most of us will learn when we have the time and commitment and for many this isn’t until retirement or the children have grown up. Learning to draw and paint can take up lots of time if you want to see progress.

What I can say is that during my ten week course I see progression from learners who only spend two hours a week on drawing and painting.  Just think how far you could progress if you kept up this study for several years.

If you are taking up drawing and painting later in life you often feel you have been left behind by those younger.  If you discover art at a younger age you have a head start, but many of my learners have had periods of their life when they haven’t picked up a paintbrush after studying art in their teens and early twenties.  Life often gets in the way for most people, work commitments, children and family seem to take over and take priority over time for our creative pursuits.   These learners feel exactly the same, like they are taking it up again and have forgotten everything.

Of course we are not learning something new, we were all drawing and painting as children.  It is more accurate to say we have not developed a skill we already started rather than it being completely alien to us. For any child picking up a pencil and drawing feels entirely natural, it is only as adults we feel we can’t do it anymore. 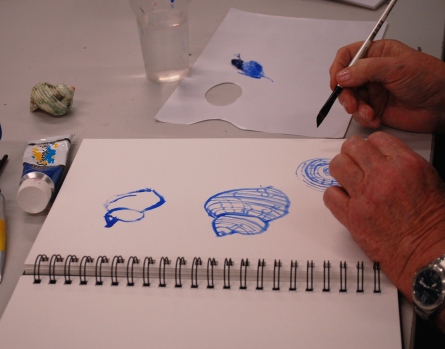 The main difference I see between younger and older learners is that the older ones can come with more ‘baggage’ around the topic.  What I mean by this is those thoughts such as ‘I can’t draw’ are much more common in older learners.  I also see older learners who are much less open to experiment and try things than the younger learners (not in all cases however).  This is because they have forgotten how to play like they did as children who enjoyed experimenting with drawing and painting.  Making marks for the sake of it, unfortunately as adults we have become accustomed to judging everything we do as ‘good’ and ‘bad’.

Adult learners tend to put something fun like making art on the back burner in life. Those that do indulge in drawing and painting tend to feel guilty that they are not doing chores, looking after family members or doing something ‘useful’.

My main piece of advice is not to delay if you think you would enjoy drawing and painting.  There is nothing worse than wishing or not even finding out if you would have enjoyed art.  As one of my oldest learners in her seventies said to me ‘I’m so glad I started when I did, I would have missed out on so much! I only wish I started sooner.’  It is never too late to find out what you could be capable of, so if you are 15, 20, 30 or 70, go for it! Art can enrich everyones life in so many ways.

This site uses Akismet to reduce spam. Learn how your comment data is processed.